I've started a small hobby project inspired by my favorite code koans. I first ran into the Ruby koans years back and have found them a fun and accessible way to describe a language. I've enjoyed my walk through the Javascript koans (mrdavidlaing and liammclennan versions) and started in on the Python koans by Greg Malcolm. So when I wanted to know more about Powershell I searched Github for a set of koans to walk me through the features and syntax of the language. To my disappointment I didn't find anything. So I decided to write my own.

The challenge of course is finishing them. I've found inspiration in the structure and content of Greg Malcom's work. He wrote the original Python koans and is also a primary maintainer of the mrdavidlaing version of the JS koans. Stepping through the code from a producer side instead of a consumer has given me an appreciation for how to structure lessons that teach themselves.

The framework that is not a framework

A koans project is easiest to stand up when leveraging a nice unit testing framework. In Powershell's case that's clearly Pester. It provides BDD style should syntax and chains together very fluently.

In this example, we're piping $true to the Should function which then asserts equality using the Be function. The thing is, you don't need to know how the functions are implemented or much of anything about Powershell to get started. Even for a novice, the syntax has sufficient context to lead you to the correct solution. 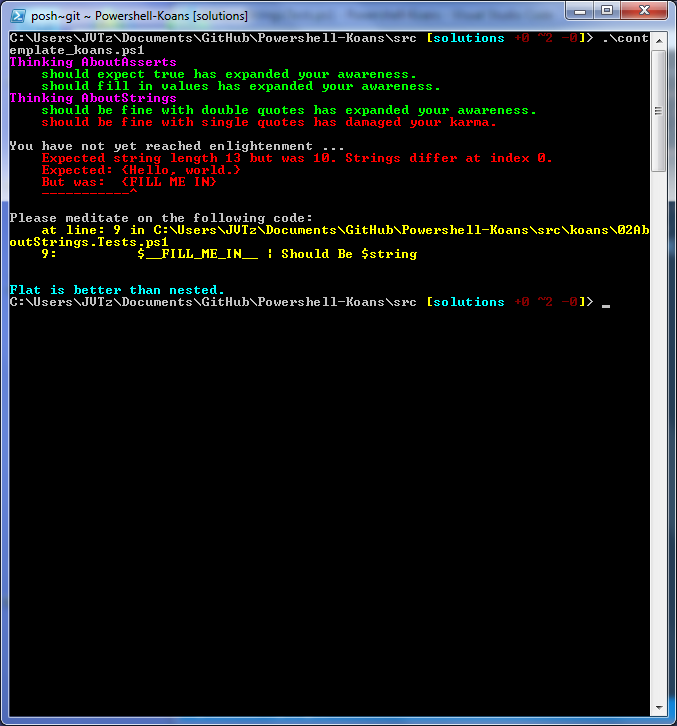 Deeper down the rabbit hole

All code koans have a few things in common

The Python koans split each of these out into a complex set of modules. I started down that path but reversed course and simplified down to a single file. Powershell makes it easy to use the objects exported by Pester and pretty up the output using the native Write-Host function. This is my first stable version:

Pretty straightforward, eh? Next steps would be to add more cryptic zen sayings to the last Cyan bit. That and build out more koans. And maybe create an automated build on appveyor.com

« From Ghost To Github
Chromebook Love »